A triangle quilt was in my future.  And now the first triangle quilt is in my past as well.  It was a bit of a learning curve but I enjoyed it and am looking forward to another one. I think the next one will be a black and yellow creation.

I learned that it takes many triangles to create a small quilt.  This one ended up being 40″ square and I used 160 triangles that I cut with my AccuQuilt Go cutter.  The biggest challenge was getting them lined up when I sewed them together so that the top and bottom were even.  If they were not even, when they were joined to the next row, they didn’t always line up and match evenly.  I also wasn’t sure how to press the seams for the first couple of row, and pressed them to the side.  I did learn that it was better if I pressed them open.  There were some mistakes in this quilt but I was proud of my self when I didn’t point out all the errors at the baby shower.  I decided that probably no one else would notice, or care and the fabrics were pretty.  The mother to be was pleased so it everything was good.  I used a Winnie the Pooh print on the back so it felt a bit more babyish.

It’s a hectic month with my mother being ill. I also decided near the shower date that I wanted to finish this quilt for the shower and make another gift when the baby is born. The meant a few long nights, and maybe not as high quality work as I like to think of myself creating.  Once again, we are our own worse critics.  One of the chuckles I did get was the night I finally got the top pieced.  I spread the Winnie the Pooh backing out and anchored it down and went to add the batting when I realized that I had never purchased the batting!  Thank goodness I was able to shake my head and laugh and head to bed.  It was probably just as well because I tend to make mistakes when I’m tired.

Shower done, gifts delivered and now on to the next project. 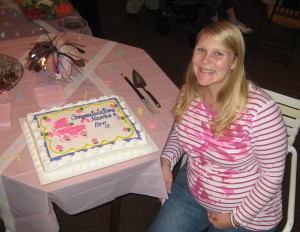 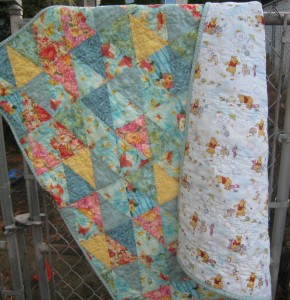 And there were more…