Dish towels for Larry.  That’s really all he wanted for his 60th birthday was some hand embroidered dish towels.  Well I can certainly pull that one off!  So for a month well most nights when I watched TV I worked on dish towels.  Larry had watched me work on dish towels before Christmas when I was making them for friends and that’s when he decided they were really cool and he wanted some of his own.  I did some different patterns on his than I did on the Christmas ones.  He really loved the coffee pot and coffee cup one that I had done for a friend so I did that one and the rest were different.  I used a hot iron transfer like this one Stitcher’s Revolution

and ironed them onto Aunt Martha’s Vintage Dish Towels

.   Hurray, the dish towels for Larry were done in time for his birthday. They were fun to do and Larry was pleased! 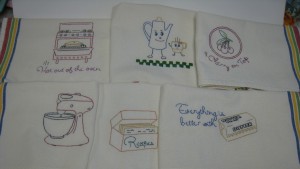