One of the fun projects that I did last year was a Cube Quilt Along. I own an AccuQuilt cutting system and one of the products that they sell is a Cube. This is actually how the dies are packaged, in a cube. Each cube set has dies that create a specific size finished quilting block. The block size that I chose to use last year was the 8″ cube and the classic companion set which is an extra set of dies that coordinates to make a lager variety of blocks in each size. Although I’ve owned the AccuQuilt cutter for several years, and I’ve sewed for many many years, I’ve never done much quilting. This cube quilt along was a wonderful way for me to learn and practice more quilting. I worked on a consistent seam allowance and learned how the shapes worked together to form blocks. The other thing that I got to practice was learning more about color placement and color values. 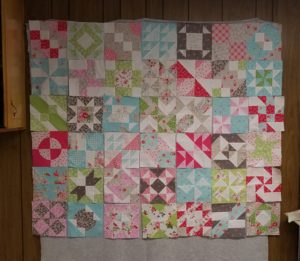 Each week for 48 weeks Bea of Beaquilter  provided instructions for a new block. It was fun to look forward to and nice to only have one block to do. Here is a picture of the entire set of 48 blocks. I guess I only have a picture of 42 of the blocks. I’ve got the rest pinned together and this weekend hope to get the rest done and sandwiched for quilting. I may decide to send it out however because it will be difficult for me to quilt on my machine and makes my shoulder hurt. I’m looking forward to the finish and am now working on the 2018 Cube quilt along. This year I’m using two entirely different color schemes and doing one with 9″ blocks and one with 12″ blocks. So far, I’ve enjoyed this as well.