Project Not So Good

Well, in the life of sewing and crafts there’s always a project that doesn’t turn out quite the way you would expect. That’s what happened with this potholder. Now potholders are pretty forgiving which is good. I always can use another potholder and this one is destined to live in my kitchen rather than be given away. I loved the fabric. It was cute with a vintage feel. And I love the text fabric as well. Putting them together in this block was not so good. The print was too busy for this block pattern and the text print was too busy to go with this fabric as well. Both prints are the same scale so there is not enough contrast. The colors were fine but ugh..

The positives however were that I can always use another potholder and I got to practice making a new to me block. I also got to practice finishing the potholder. I struggle with the hand sewing to close the side where I turned it so every time I practice it gets better. There will be better choices next time and I did use up some more fabric. 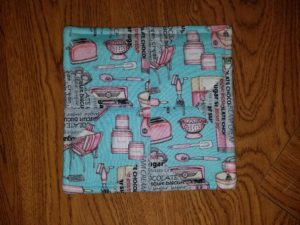 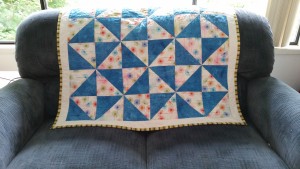 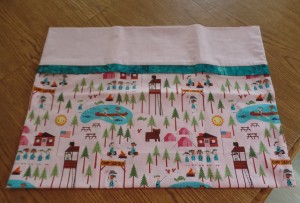