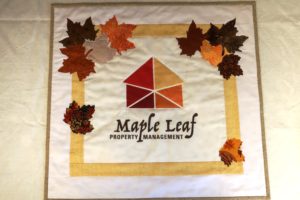 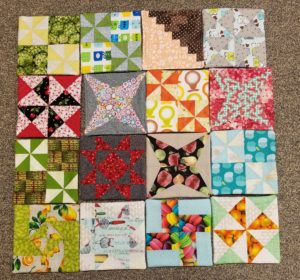 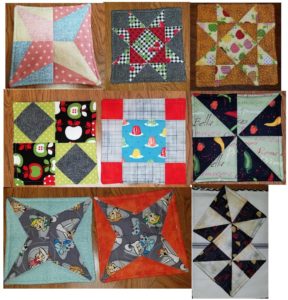 Although I love to give and receive cards, it feels so wasteful when you throw them in the trash. This year I decided that instead of cards, I would give my friends potholders when there was a card worthy occasion. There have been exceptions of course but for the most part I’ve purchased very few greeting cards. Instead I’ve used my 8″ cube and 8 1/2″ die for backs and insulbrite and batting and I made potholders. I did also use the kite die for several as well. It’s been fun to do, well received and I’ve used lots of those very fun kitchen fabrics that I’ve collected. A win win for sure.

Once again, I made postcards and sent to some friends at Girl Scout Camp. I enjoy it. Not sure what the others think but I know that some of them do so that makes it ok.

Here are this year’s versions. 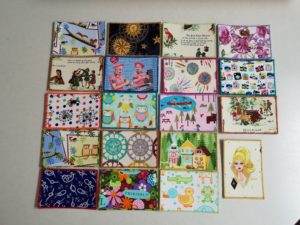 More babies are coming. I’ve made a number of baby quilts and things in 2016 and already working on the first ones for 2017. I do like making baby things because they are fast and I can try different patterns and colors. I can then pass it on but I never really know if they will be used and most often I don’t hear anything or see them being used. Occasionally, I do hear that a quilt I’ve made is an important part of the bedtime routine. Once it’s out of my hands whatever will be will be but it’s nice to know it’s appreciated.

This quilt and the tag blanket and pacifier clips were for a surprise baby. The baby is anxiously being waited for by the family. 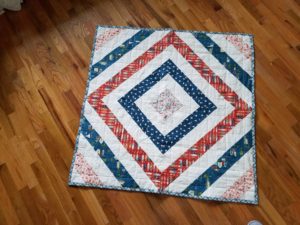 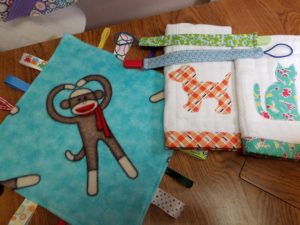 A cute little zip pouch was in order for a little pair of ear phones.  This was for one of my brothers.  He was going to take a long plane ride and was complaining about not being able to wear his ear buds for very long and it was going to be a 12 hour flight. I have a pair of the over the ear head phones and have been pleased with them because I too have a problem with the ear buds. They just are not comfortable for very long. One thing I have learned about this type of ear phones however is the mesh over the device that rests against your ear does get pulled off easily. When I put these in a pocket and pull them out again it doesn’t take long and they are coming apart.  This of course in my mind equates to some kind of storage device and in this instance a zip pouch is perfect. My brother is also a bit of  a neatnik so this is right up his alley. I found this “manly” fabric with arrows on it, in a lovely blue/green and knew it would be perfect.  I don’t know how much he actually used the ear phones, we haven’t had much chance to visit since he returned but it was a quick, fun and satisfying project. 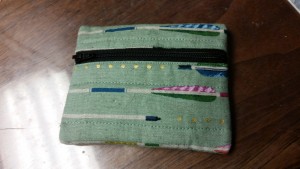