Bobbins! I mean bobbins and more bobbins.  With this big project I’ve been working on I’ve been winding and using bobbins at an amazing rate.  I’ve never wound so many bobbins in such a short amount of time.  Jim gave me a  “Singer Sidewinder” for Christmas and I thought it might be a nice addition to my sewing  equipment but I didn’t realize how much I would really appreciate it when I was using bobbins at an alarming rate. I’ve just wound an additional 9 bobbins.  I’m estimating that this brings the bobbin total to about 40 so far. It also takes a huge amount of thread.  I have used almost two entire 100m spools of thread.  Amazing! Funny thing about this however is that I’m not really tired of project.  It will be nice to have it finished because then I will feel that I can make some other items but for now I can see the finish line and I’m satisfied with that. 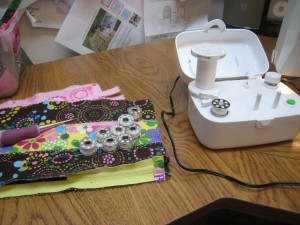