I have a die that will cut hearts. Valentines day is coming and I love red.  Seems to me this is a perfect combination to try something new.

I have thought about this project for several weeks but had not made a decision about the direction. I finally decided I just needed to cut some hearts and then go ahead. I didn’t have any more product to make iron on appliques so the first step was make a trip to Joann’s.  Now if you shop regularly at Joann’s you should never have to pay full price which is fine with me.  That leaves more money to spend somewhere else. When I came home I had two different kinds of iron on applique product.  I did some from both the Wonder Under and Heat and Bond Lite and have definitely decided I like the Heat and Bond better.  Its easier to use and peels off the back more easily and cleanly.  This however was an indication of how the entire project was going to go.

There were continuous challenges with this project. First not all the hearts peeled well.  I decided I was just going to applique them onto a white square and satin stitch them.  Sort of a make it up as you go kind of project.  It’s been a long time since I have done much satin stitch applique so the hearts are not very consistent.  After the third one I had already decided this was a project that was likely to end up in the trash.  I did continue however because I decided it was already cut and it was good practice. After two squares of applique, several borders and a quilt sandwich I decided that it still didn’t look very good so I might as well practice some quilting. I started and it was really ugly!  At this point I was about ready to put it in the trash. I ended up doing all sorts of free motion quilting patterns on the entire piece.  There are many inconsistencies in the stitch length and smoothness but by the end it actually improved the looks of the entire piece.  I think that the red fabric is so busy that by quilting the white it helped tie it all together.  An instance of more really was better.

I put a binding on and it is on my dining room table.  It I just go by and glance it actually looks ok.  I sure wouldn’t want anyone to look closely at it and I certainly wouldn’t gift it to anyone but for a home product that I thought I was going to trash, it turned out very valentinish. 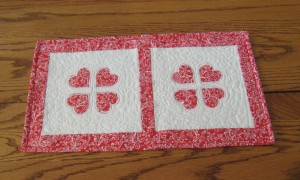