My seam ripper is my friend!

My friend the seam ripper (unfortunately)  has been used several times in the last few days. First it was the iron spitting brown stuff on one of the sashing strips.  I was able to sponge most of it off but after a good night sleep, I decided it really did need to be replaced.  First thing this morning that’s what I did.  I also started some clothes washing, washed the sheet that I am going to use for the backing, cut all the sashing strips for the rows and cut all of the binding strips. That is after I checked my measurements many times.  I’ve now started to sew all the rows together and guess what I discovered.  I sewed the nine patch square to the wrong side.  In other words upside down which meant that I ended up with two squares of the same fabric together.  I was going to start ripping off the sashing and flip it around when I realized that if I chose a different seam, I would only have to rip or unsew as some say, one seam rather than two.  So I’m sitting here ripping seams and ripping a book CD to my computer so I can put it on my iPod and listen to a story while I sew.  I do have a tv in my sewing room and do watch that but when I’m sewing it’s really more about listening rather than watching.  So hard to watch the seams and the TV.  Now I’ve finished the seam and ready to head back to the machine before I have to go and help my mother.  She’s then going to come here for dinner.  Ribs and corn on the cob.  Should be yummy! 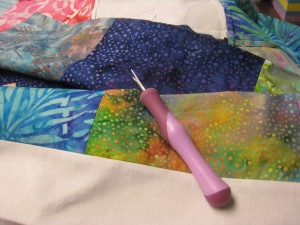