One for me.  I actually decided that I was going to sew something for myself today.  The nice thing was that I decided I wanted to do it and actually finished!  Now I have to admit it’s not a very complicated sewing job or even very time-consuming but it is something I’ve wanted for several months.  A little bag to carry my iPad and maybe a snack in when we go to chemo.  We have been going to chemo every week since the beginning of May and only have one month left so I decided I better not puzzle over this any longer but just get ‘er done.  I had a piece of fabric that I’ve bought tn both the blue and orange colorways but decided to use the blue. For  the lining I used a chrysanthemum print that is not a favorite but looked good with the fabric and actually looks nice in the bag interior.  I made simple fabric handles, used iron on batting to give it a little shape, used an elastic band and a spare button and now it’s done. I made a shallow boxed bottom to create a little depth and I think it will be perfect.  Just a little bag but a satisfying finish.  Yes, one for me. 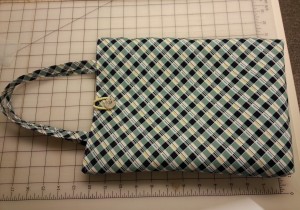 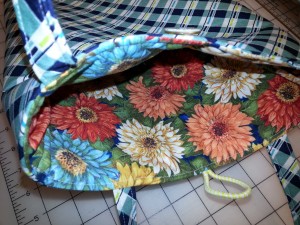