Patterns old and new. As I have been sewing baby gifts I’ve dug into boxes of old patterns that I had stored in the back of a cupboard.  This cupboard is difficult to reach so the patterns have just been sitting.  I’ve always known that one day I would be digging into these pattern boxes for old patterns I had used and not gotten rid of.  I really was looking for baby bonnet patterns.  I thought I had more that I found.  I liked my girls to have bonnets on their heads when they went out.  They looked cute and my mother told me it would help prevent ear infections!  Now I’m not sure that really helped but I did like bonnets and they were fun to make.  Now it’s fashionable to wear bonnets again although it’s more likely to keep the sun off of delicate skin. I suppose the looking cute still applies as well.

In spite of the lack of bonnet patterns I did find lots of PJ’s patterns and some bib patterns and special dress patterns.  After I had sorted through the boxes I pulled several patterns and then returned the boxes to the cupboard.  When I was finished I laid the patterns on my desk and started looking at the differences in pictures and in price.  I ended up with patterns old and new covering a 60 year span.  The picture on the right is a McCall’s night-shirt pattern from 1952. The price.. $.50. The middle pattern is also a McCall’s pattern but it’s dated 1982. This bib pattern was used to make some bibs for my little girls.  The cost $2.00. The third pattern is a Simplicity pattern that I just purchased. This makes it a 2012 pattern for a dress and bonnet  and it’s price is comparable to the McCall’s patterns and the cost…. $14.95. Now Joann’s regularly sells them for 40% off.  I guess the pattern companies want us to think we are getting a good buy!  Hmm… what do you think?  I always try to buy patterns on sale which you can do for  the big pattern companies like Simplicity, McCall’s and Buttrick.  Other patterns like Kwik Sew and independent pattern makers are usually not reduced in price so the cost is often $10-$20.  I know there are usually several views and several sizes in each envelope so maybe that’s ok.  Opinions? 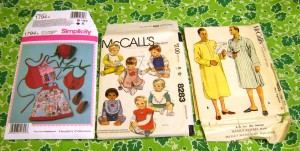