So hard to believe it’s the 6th of August.  If you live in the Pacific Northwest however you’re glad that it’s August and summer has arrived!  Finally.  We certainly have been patient for long enough.

I recently had a birthday.  Now for some this is not an extraordinary event however this was a significant birthday.  Usually birthdays are not a big deal to me but this bigger number really makes me stop and think.. Well that was enough thinking.

Last weekend we were invited to my brother and sister-in-laws place at Lakebay.  I was just looking at the pictures again and it has me longing to be back there and enjoy the beautiful views, the beach and the good company.  One of my brothers lives on San Juan Island and he even brought crab.  I’m still drooling thinking about the many good meals that I had.  The rest of my family made it a special weekend celebrating my birthday and the birthdays of my hubby and also brother Dave.  We don’t usually get to all celebrate together so that was a special day.  Even our kids were there. Jim, Dale and Jill, Larry and Joni, Dave, Amy, Kim and Aaron, thanks for the memories.

I decided I should take a hostess gift with me.  As I thought about it I decided that some new dish towels and hot pads were in order.  I just bought a new toy, a Slice Fabrique and had a die for it called under the sea so I wanted to do some applique on the towels.  There was a bit of learning curve to the process but I did make some appliques and for a fast project it was lots of fun and I like the way they turned out.  The towels are microfiber so they should dry lots of dishes and still be functional.  In a vacation house this is important.  Who wants to spend time doing laundry. 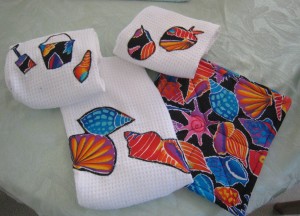 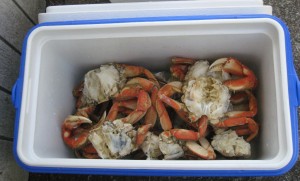 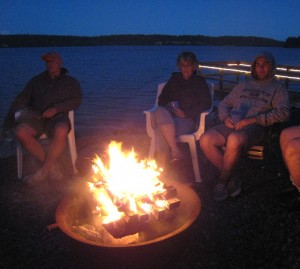