I haven’t had too much time to sew this last week because I was out of town.  The band did a fabulous job but did not win.  It was fun to see a few snippets of them on the Billboard Music awards last night however.  They did show a montage of the bands and their road trips so Hotels was there.  Very cool.

This week the sewing has been baby bibs.  I had lots of fun doing these. They were quick and easy.  I know there are lots of free patterns out and previously I just copied a pattern that I had here  but I actually used McCalls 6108. It was fast and easy and the proportions were perfect. I used some fun fabric and lined them with terry and the Mom was pleased.  Here are the little girl versions and I’ll post the little boy versions a bit later today. 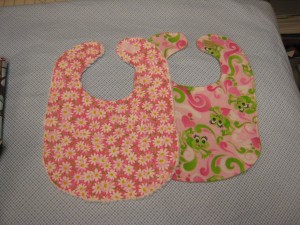