I’ve made it through Christmas.  Tomorrow is Aaron’s birthday so dinner again but I love to have the kids around and don’t mind cooking if they will come and visit for a while.

Part of the bigger family Christmas celebration this year was a handmade gift exchange.  We each had the name of a family member. The only guideline was something you made.  I enjoyed seeing what everyone created for their giftee.  I had Kim’s name.  The item that I had planned on making didn’t happen.  I ran out of time when my mother became ill and ended up with a 5 day hospital stay from the 15th to the 20th.  I had finished most of the other projects and knew that I would have plenty of time to create this gift.  I’m not going to mention what the gift is. She will probably get this for another occasion because now I have the pattern and all the supplies. My second idea came together quickly.  Kim is a knitter and last fall I traded a friend some market bags for yarn that she had spun into a beautiful skein just right for knitting.  I passed this on to Kim with a bag that I made for her to carry her knitting in.  It’s easy to tuck in a bag or a suitcase.  I had also included a little pair of scissors.  After the gift opening, I told her that I almost put a ribbon on the scissors and attached it to the bag so they would not be so easily misplaced.  She said that she would love that.  I ended up opening the side of the bag and attaching a D ring.  This D ring is now hard at work holding a clip that has the scissors, a tape measure and a needle book attached.  They are all long enough to leave attached to the bag and still be used but the clip can also be unhooked and the tools used.  It’s big enough that it will be noticed if the bundle is set down and yet small and light enough to easily live in the bag until they are needed. 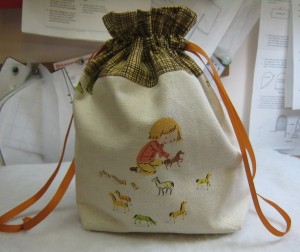 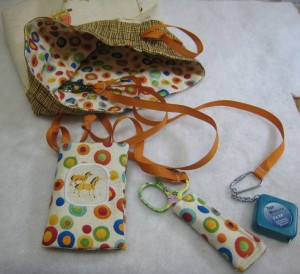 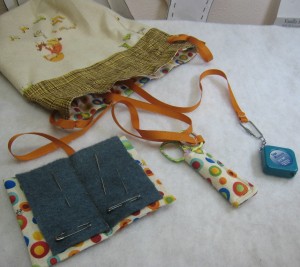